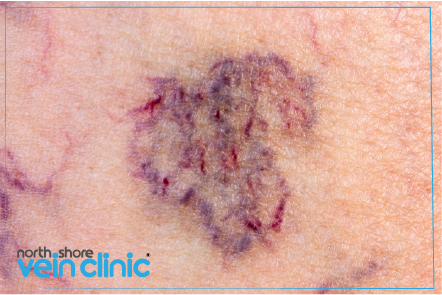 Facial Spider Veins, also known as Facial Telangiectasia, is a condition where tiny red blood vessels (broken capillaries or venules) on the surface of your skin become widened. Telangiectasias are tiny visible blood vessels that are similar to Spider Veins on the leg but refer more specifically to the face, especially around the nose and cheeks.

This condition affects at least 20% of people have Telangiectasias at some time in their lives, and many of them will develop spider veins.

Women have double the risk, or are 40% more likely to develop them. Some research suggests that birth control pills and hormone replacement therapy may intensify the condition.

These patterns, or Telangiectases, form gradually and often in clusters. They are also commonly known as “Spider Veins” because of their fine and weblike appearance.

Spider veins can be found in areas that are easily seen such as: Eyes, Cheeks, Lips and Nose. However, they can also occur on many other areas of the body.

The impact of facial spider veins is discomfort and some people find them unpleasant. Many people choose to have them removed for cosmetic reasons.

To prevent Telangiectasia, protect your skin from the sun and extreme temperatures. Spider Veins are generally not dangerous. In rare cases, Telangiectasia cases may be a symptom of serious illness. In such cases, Spider Veins can be linked to a more serious condition called Hereditary Hemorrhagic Telangiectasia (HHT).

Hereditary Hemorrhagic Telangiectasia is a rare genetic condition that causes Telangiectases which can be life-threatening. Instead of forming on the skin, Telangiectases caused by HHT appear in vital organs, such as the liver. They may burst, causing massive bleeding (haemorrhages).

Treatment for Facial Telangiectasia is optional and may be done to improve skin appearance.

AHPRA WARNING: Any surgical or invasive procedure carries risks. Before proceeding, you should seek a second opinion from an appropriately qualified health practitioner.

You just clicked outside of the frames!

&nbspRemember my option. Do not show me this dialog again.

Call our office to create a booking now at:

Fill in the form below to send us an email:

Fill in the form below to make a booking:

Fill in the form below to chat with us:

Fill in the form below to consult your doctor:

Please note one of our team members will contact you shortly to confirm this booking and give you more information.

Are you sure you want to continue?